What more? You have been selected as the FIFA goalkeeper of the year 5 (FIVE!) times in a row from 2008 till 2012. No other goalkeeper has ever managed to win it that many times. Iker, you will be disappointed, because we remember that you have pulled off “impossible saves” so many times in your career that we have lost count of it. So, Iker, if you didn’t want to be remembered as a good goalkeeper, we have to disappoint you.

An era is about to end. After 25 years at your boyhood club you are now going to wear another shirt. Coming to Real Madrid at the age of 9, you have since served this team like a soldier at duty.  You’ve been  a true fighter on the pitch, a leader for the team, someone who puts his team before his own self. You have been a football player that even the fiercest rivals have not been able to dislike. 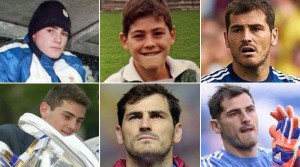 Just like everything else in life, football also have cycles. Cycles have to end, great careers have to end, because nothing lasts forever. Steven Gerrard has left Liverpool, Xavi Hernandez has left Barcelona, Frank Lampard left Chelsea and Pirlo has left Juventus. Your time has come as well, Iker. You are stepping down as a legend. Yes, the past couple of years have been turbulent, but you finally lifted La Decima in 2014,  and can leave the club with your head held high up in pride. Proud of your achievements, proud of your legacy, proud of your sacrifices, and  proud that each and every football fan admires you as a player and as a person.

Let us hope this is not a good bye, but just a “see you soon”…

Below are some memorable highlights of this great mans Real Madrid and Spain career: