Apple needs no introduction (not talking about the fruit). World’s most valuable company, with an impressive product-line ranging from the Macbook, iPad, iPhone, iPod and the latest addition the Apple Watch. Steve Jobs, with this company, totally changed the way we listen to our music, take our photos, communicate with our friends and least but not least how we’re connected to the world through Internet. The iPhone with its seamless touchscreen that had never been experienced before, coupled with the software that allows apps to be downloaded, and regular updates to improve the phone. This proved to become an industry game changer. Samsung, HTC and other companies soon followed, and new benchmarks were set by Apple. 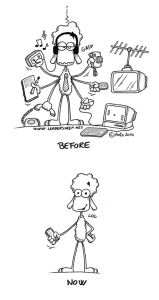 Take a minute to think about how YOUR life has changed after getting an iPhone/smartphone… (do it!).

Now let’s talk about Tesla. The genius of its CEO; Elon Musk, has made the company one of the most talked about in the car industry.

Elon Musk is one of the founders of PayPal, as well as launching satellites into space with his space company (Space X). So not only does this guy have IT knowledge, he also knows astrophysics. As for Tesla Motors, Elons vision is to provide sustainable (read: electrical) transportation to all over the world. He has a clear plan:

1. Show the world that electrical cars can be fast (very fast), comfortable to drive and at the same time look good. So he introduced the Tesla Roadster in 2008. A sportscar! The aim was to prove his point.
2. Introduce a luxury sedan, all-electrictal, that will serve as a household’s primary car, no need for a back-up second car! A car that has a lot of space, looks great, is really fast and with a giant touch-screen to control it (will get back to this point a bit later on). So he launched Model S in 2012.
3. The next step is to introduce a cheaper car for the “masses”, that many more people will afford to have (Model 3). But before that: A SUV called Tesla Model X is coming on the market, for the big-car hungry consumers. He is doing this all while keeping no patents! The patents are open for everyone to use!

Ok, so why is this company and this car so special? Actually, it is not a car. It is more of a computer on 4 wheels. Tesla is more like a software company than a car company (In fact, it is a Silicon Valley-based company). We can say that Tesla is “the Apple of the auto industry”.

I will not get into the financial, strategic or business aspects of these two companies, nor will I explain the product specifications in details. We also know there are several backsides of big corporations as far as cheap labour in far East is concerned (Apple often getting criticised for working conditions in China). CSR is another discussion.

Why am I so fascinated by these two companies, and what are he common features between Apple and Tesla? Most of the companies manufacture products in order to fulfil a demand that is already present. They are run by the simple supply and demand theory according to the market situation. Then there are companies that revolutionise the market! They not only satisfy a demand, they take it a step further to actually create a new market, a new demand and provide us with new user experiences. Few companies change our perception of how products should be used, felt and experienced. Apple and Tesla are two of those.

Examples? The market for mobile phones was already there, but Apple came up with the iPhone to not only fulfil the mobile phone demand, they actually took it several steps ahead and gave the world something much more than an ordinary phone. It gave us the ‘whole world’ fitted in the palm of our hand. Who thought about the need of a mobile phone with NO physical buttons to type on? Blackberry certainly didn’t. Apple created a new way of using our phones, and other companies followed. Yes, there might be companies that introduced the touch phone before the iPhone, but Apple made something with a user friendliness that had never been seen before in a touch phone. Also, the concept of App Store as well as the software updates paved way for a whole new era in the mobile phone industry.

Now Tesla is doing the same: Market for electrical vehicles (EV) has been there, and other companies have produced EV’s before Tesla. But Tesla has taken it to a whole new level. A new way of driving, a new perception of how EV’s should be, new benchmarks and new ways of marketing. While we see biggies like Mercedes, Toyota, Ford and BMW bombard us with ads everywhere, Tesla simply rely upon strong word-of-mouth, hence no need for marketing (they have a marketing budget of 0, zero, nada), and they sell their cars directly to the end-users with no middle men.

What other similarities are there between Tesla and Apple?

1. Elon Musk is a marketing genius, presenting his products in lawish fashion in much-hyped events. Anyone remember Steve Job’s presentations? Yes, you got it.
2. This company doesn’t push boundaries; It creates new ones! Who would’ve thought about a car with nearly no physical buttons to manage and control it? Just a giant touch-screen. Who would’ve thought about a car getting over-the-air software updates to improve and add new features to it (just as Apple did with phones)?
3. Tesla Motors have redefined the playing rules of the automotive industry, just in a matter of 3-4 years. The same way as Apple did in the phone industry.

I wrote a project about Tesla Motors in 2013 during my master studies, and I have been fascinated by  this company since. But after driving a Tesla Model S for half a year now, I can conclude with the fact that I’ll never go back to any other car (just the way I thought about the iPhone when I first got it in 2008, and have never used any other phone since). There are no boundaries to what a company like Tesla Motors, with a CEO like Elon Musk can do within the next couple of years, because this is just the beginning.
Get ready to be ‘electrified’!